What is a Pump Paintball Gun? Play Your Games With Skill

One of the more exciting ways to play paintball can be in controlled shooting by using a more standard, older firing system. This method relies on accurate shots and not the way that many players will play where you shoot as many paintballs in volleys downfield to take out opponents or lay down cover fire.

What is a Pump Paintball Gun? A pump paintball marker or gun is a configured setup which only will allow you to fire after you pump. The pump loads the next paintball pellet into the chamber to allow firing. These markers traditionally run on smaller bottles of CO2 or Compressed Air.

Now we can expand your understanding around where pump paintball got its start along with the basics of playing this way. Afterward, we will try to help you decide whether this method of play is for you and what the benefits and drawbacks are when playing with a pump marker.

Prices and images pulled from the Amazon Product Advertising API on:

As you can probably surmise these same markers weren't exactly what we use today, they were an oil-based pellet and a less graceful marker. Over time though as people do, we started to use them to play and "tag" each other in addition to cattle.

They have continued to evolve like other semi-auto and full-auto paintball markers and now provide all manner of setups. Some have limited hopper size, limited air from CO2 cartridges, to those running remote lines from a compressed air tank on their backs.

When you choose to "play pump" it means that you are playing in the match with a marker that features a pump to load paintballs. The benefit to pumps is that the marker is much more fundamentally simple than the other markers in play.

To fire a pump paintball marker you will load the hopper with paintballs and each new paintball will only be moved into firing position by cocking the marker prior to each trigger pull. This is different than a semi-auto marker that would add this paintball without the need to cock the marker to fire.

Should You Play Pump?

In the paintball world pump paintball has become a sub-niche or "cult" within the sport of people who specifically play only this mode. You do not need to be a part of this niche to play this way but you will have many curious players want to speak to you about your marker due to this.

To be fully clear the pump player amount won't be a big chunk of the opponents in almost all games you play due to the skills needed to play it at a high level. Don't let this limit you though, the challenge of the pump is the entire fun of the pump and if mastered will make you one of the most popular players on the field.

Are you the player who looks to be challenged and to up the difficulty and skill? Do you always try to play games on the highest-level difficulty rating?

Always make sure to look at the rules online or contact the field you plan to play to ensure they allow pump markers, some fields have specific rules and games at different times and this you want to know ahead of time.

You don't need any "special" permissions from the referees or players on the field to play pump, just keep in mind that you will, in many cases, be the only player on the field playing pump.

Why on earth would someone choose to play a game where everyone else has semi or full auto ability while you yourself would have single shots? Sometimes it is the edge that gives that thrill to continue playing, maybe it is budgetary constraints, just always play on!

Now I know with the listing of all the benefits listed above you would think it would be a no-brainer to play pump style. Thought as there are positives there are also negatives that can impact your enjoyment and fun in games. 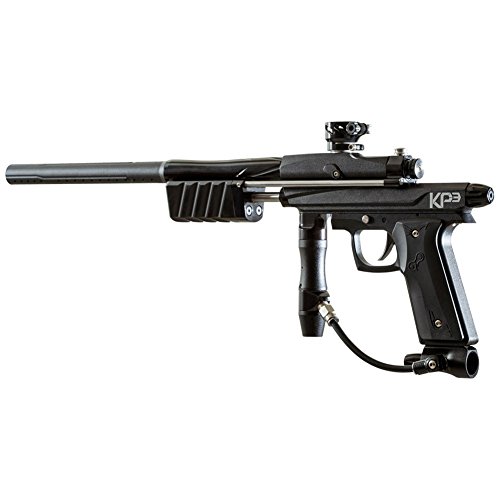 Offering a quality product for a very good price versus the competition the Azodin Kaos KP3.5 is the choice for players looking to play pump. A little more expensive than the other Azodin and less than the Empire Pump, this sits perfectly to provide valuable time for play while not busting your wallet!

I love a challenge, depending on my mood before the game I have used pumps before but I am definitely outclassed a lot of the time. I don't play to win as much as to just be with like-minded players in the pursuit of fun.

Don't get me wrong, I absolutely want to win but ad father time continues to press forward I work more to benefit my team and to rock out. I can't wait to get back out there to play even though sometimes it is much longer than I want it to be.

17 Laws of the Game Soccer: Learn Them, Live Them

Can Soccer End in a Tie? Why This Isn't Bad but Amazing!

How To Walk on a Slackline? Balance Is Your Key

What Archery Events Are In The Olympics?

Is Bowling Difficult? How To Score Higher Than 100 or 200